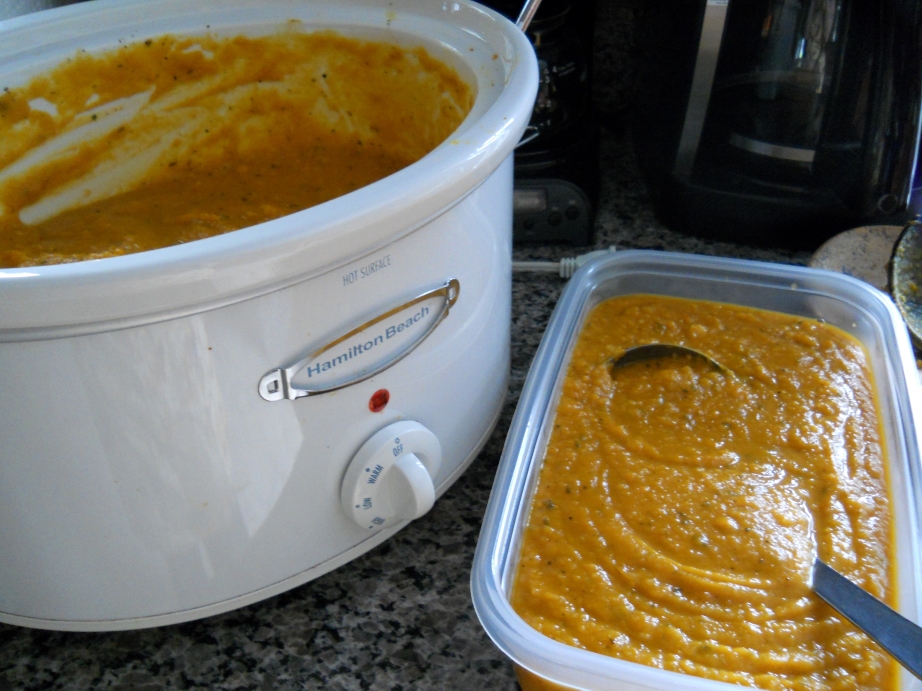 If you were at the Women Writers and Artists Matrix Weekend in Saratoga Springs, NY earlier this month – specifically, at Amejo’s house on Saturday night for the “Women, Wine & Cheese Reception” – then you might’ve been waiting for this post, for this recipe. It was a big hit that night, devoured even before a few latecomers arrived at Amejo’s home! Of course, I forgot to take any pictures, being busy being social and all. I decided, however, to whip a batch again last week, but not just for the camera. Bill hadn’t gotten a taste (I took every last drop off to the event with me!), and it’s such a good way for me to sneak a bit of sweet potato into his diet. Yay! for that beta-carotene and all the other nutrition it provides. And the “magic” too, which I’ll get to later. (Incidentally, if you’re new to this blog and don’t know about The Terrible Three, or the only three vegetables my hubby loathes, you might want to check out the 12/11/11 post covering our delicious experiences at internationally-famous Moosewood restaurant in Ithaca, NY.)

The chicken stock mentioned in my previous post turned out to be the best I’ve ever conjured up. Which might not seem like much to say, since I think I’ve only made it from scratch once, perhaps a year or two ago for a batch of chicken soup – except that this version made a huge difference in not only this soup but also in the couple applications I managed to dream up for it since. So I’m sold on going homemade as much as possible, especially for soup. In fact, there’s a pot of stock simmering on the cooktop upstairs now, its intoxicating aroma wafting its way downstairs as I type. I expect to split this batch between the freezer and cooking up a pot of White Bean Soup (with Chicken) for the WomanWords workshop this weekend with Alice Orr at Still Point.

Our recent hot weather is supposed to break, and the mid-60s temp expected for Saturday is just fine for soup. Stock done today; soup-making sometime tomorrow, in between packing to leave early for Still Point on Friday (picking up Alice at Saratoga train station before settling in at SP!). Oh yeah, I’m also going to Leslie’s this afternoon to do art and then on to grocery-shop for the weekend. Yikes! What a schedule… but I do intend to finish and post this blog before all this is accomplished.
+++++

Before providing the recipe, how about a little of the food’s magic? This blog is dubbed, after all, Kitchen Cauldron. and I do like to bring it (the magic) into some posts, exploring ancient beliefs about a food along with some nutritional facts. If a witch is one who practices alchemy, who transforms one simple item into another of greater value (think: lead into gold as the metaphor goes, or more to the point for KC, basic food items into nutritious and delicious delights), then that must be me. Further, if a witch is one who takes experiences and thoughts and transforms them into words, why then I also qualify as one!

Squash, this soup’s main ingredient, has been around a long time so there’s plenty of lore. According to my handy Cunningham’s Encyclopedia of Wicca in the Kitchen (Llewellyn Publications, 2003), it’s been in the Americas since at least 4,000 B.C.E. It was so sacred to the Hopi that they even created one of their spiritual (Kachina) dolls topped with a head of squash and wearing squash blossom necklaces. This vegetable, in any form (butternut, zucchini, etc.), inspires spirituality. If someone maintains s/he doesn’t like squash, then serve that person zucchini bread! Cunningham says squash can “increase awareness of the non-physical reality around us,” and he also lists it among foods that are “generally used for promoting courage, protection, aggression, sex and health.” In The Kitchen

Witch Companion: Simple and Sublime Culinary Magic by Patricia Telesco (Citadel Press, 2005), the author writes in the intro to a recipe titled Multi-Tasking Squash, “Squash comes in a huge variety of colors and sizes, and some of these can grow to exceed 240 pounds and produce hundreds of seeds. These characteristics provide this vegetable with the symbolic value of slow, steady development that leads to substantial rewards.” Hmmm. Got a big project you’re working on? Maybe this is just the soup to enhance your ability to ace it!

I think I’ve gotten into pumpkin and sweet potato symbolism before, but quickly:

Then there are the potatoes in the soup. Earth element, since they come from it, they’re known for protective qualities and for promoting compassion (now, don’t they sound like Mother Earth sorts of attributes?). The Spaniards brought the first potatoes to Europe in 1534, where they claimed the veggie could cure impotency. This led to the value of spuds jumping outrageously high – in some cases, sales amounted to the equivalent of $1,000 in today’s U.S. dollars! Of course, this did lead to a problem when potatoes were declared “unholy” in some parts of the world (I believe Scotland was the first) and their consumption was banned. Cunningham suggests that one might make the potato’s effects stronger by adding onions, chives, dill weed, rosemary and/or parsley, but I’d add one bit of advice: Don’t throw out your Viagra either.

Garlic cloves also possess protection and health qualities. In fact, in ancient times, garlic was touted as a cure for insanity. And Roman soldiers consumed it believing that it afforded them courage on the battlefield. There’s one stipulation here, however, with garlic: don’t bother with anything like bottled, canned or dried. Allegedly, it’s only the fresh stuff that works.

It seems all the ingredients in the chicken broth are aimed at good health and well-being (Jewish mothers knew what they were talking about!), especially the chicken that played a major part in producing it. As for the spices added to this Squash and Sweet Potato Soup, they offer magical benefits too: black pepper promotes cleansing, purification,

protection and banishing; salt also symbolizes cleansing and purification, with grounding thrown in; bay leaf enhances psychic powers, strength and health; sage adds possibilities for purification and wisdom; and parsley brings good for luck and protection from accidents. (In addition to other sources previously mentioned, I consulted Cait Johnson’s Witch in the Kitchen: Magical Cooking for All Seasons [Destiny Books, 2001] on the spices.)

I can’t forget to mention a few utensils you might be utilizing as you produce your soup, for the tools of the trade are not to be overlooked as part of the magic. Telesco provides a “Magical Association” for several of these. For instance, she lists a blender as being associated with “Mingling with others, stirring up energy.” Not a bad association, and plenty valid if you’re going to share your soup with others. I also assume this  works for a food processor and an immersion blender as well (and even a hand masher). She lists “Knife” as magically connected with “Cutting away, sharpness of mind, separation.” A fork might symbolize “Piercing, penetrating, perception.” I found nothing about slow-cookers, by the way, but I tend to think they’re about patience and the wisdom of taking care of oneself (as the cook, I think of an occasional slow-cooker meal as a rest period for me, at least once everything’s prepped and in the pot, then left to cook for hours during which I might write, read and otherwise own my own time!).

Cunningham says cups and bowls are related to the element of water and are therefore “entirely receptive.” They possess loving energies. He tells us that earlier cultures connected rounded pots and bowls with the Great Mother – a concept that was pretty much universal. Goddess energy. Rounded pots and bowls, like the earth. The association of witches with an iron pot, the cauldron used throughout Europe for cooking, derives from Shakespeare’s “three witches” scene in Macbeth. The old Bard’s witches weren’t doing anything at all unusual in using a cauldron for “brewing” – what was weird was what the women were cooking up (including their ingredients)! Today’s Wiccans, Cunningham states, honor the cauldron as a symbol of the Mother Goddess.

That’s more than enough magic for one post, except that I must state my best take on all of this. Yes, it’s a bit of kitchen alchemy – as I defined it earlier. And there’s lots of magic in food, in the ways it can nourish us, give us strength, make us happy, bring people together and much more. There’s magic in food like there’s magic in everything, and intention is its best enhancer. Having just read the newly revised (to add artwork) Food Rules: An Eater’s Manual by Michael Pollan, illustrated by Maira Kalman (Penguin Press, 2011), it feels right to believe that setting some of the simple intentions that Pollan suggests also sets the stage for Magic to happen (like, “#2, Don’t Eat Anything Your Grandmother Wouldn’t Recognize as Food, or #19, Eat Only Foods That Have Been Cooked by Humans, or #64, Try to Spend as Much Time Enjoying the Meal as It Took to Prepare It, or #74,Don’t Get Your Fuel from the Same Place Your Car Does. Following through on even a few of them might make you a Witch – whether you think so or not!

And now for my latest Witch’s Brew~~ 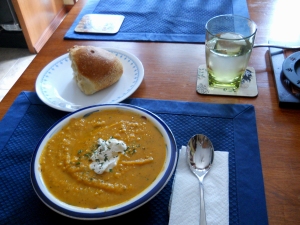 SLOW-COOKER SQUASH AND SWEET POTATO SOUP
Yields enough for a small crowd (10 to 20, if they keep it to cups instead of bowls!)