Let me first confess that this year’s stuffing was not my best rendition. I was so thrilled that I had homemade turkey stock to add to the mixture, frozen a few months ago for just this occasion, that I overdid the moisture part. Or maybe the moisture just didn’t absorb as well as usual into the bread/croutons because, for the first time ever, I didn’t dig into the bowl with my hands and mush all the ingredients together, as I’d been taught to do by my mother. Apparently I was led astray by those gorgeous photographs of stuffing spilling out of the turkey’s cavity, with obvious chunks of bread, aromatics and sausage on display.

Well, our family likes most of those ingredients well-combined. Besides, not “mushing” can also result in a too-dry stuffing!

The recipe for stuffing in this blogpost is adjusted so that readers can make their own judgments on how much liquid to add to their stuffing, based on what I used and what I’d suggest starting out with. Our stuffing wasn’t waterlogged but could’ve done well with perhaps half-a-cup less of stock. It tasted great, however, and it was even better a couple days later as part of the topping (along with some of the potato casserole) on a Turkey Shepherd’s Pie.

As mentioned in yesterday’s entry, I opted for stuffing in the turkey rather than just filling its cavity with lemon and herbs and making it totally a side dish, baked separately. There’s never too much stuffing.

Only one family memory regarding stuffing and then on to the recipe. My father often got involved in the cooking on Thanksgiving, at least in Big Bird part, and he would sometimes mix together what he called “a Polish stuffing,” which translated to how his mother made it. Nana Zembo (who arrived in this country from Poland early in the 20th century) made a version that included raisins. I was never certain this was a true Polish food tradition until I perused my copy of Polish Cookery: The Universal Cook Book by Marja Ochorowicz-Monatowa (Crown Publishers; my copy is its 13th printing, 1975). It contains two raisin stuffing recipes, one in the “Poultry and Poultry Stuffings” section and the other under “Stuffings for Roast Pig.” I didn’t own this book, however, when I tried making a rendition of Nana’s dish. All I did was add raisins to my usual recipe (and maybe some diced apples or applesauce). Tasted glorious to me, but I found I was also the only one eating it. Our traditional TurkeyDay dressing disappeared into well-filled bellies but I guess “honoring our Polish heritage” only goes so far. 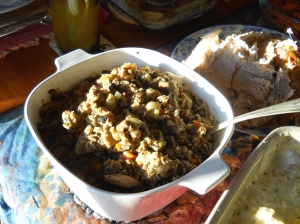 There you have it – my guidelines for great stuffing. It takes practice in judging exactly how much stock you’ll want in your own version. And still, after years of T-Days (or whenever you’re indulging in turkey), you might not come off with exactly the texture you were aiming for. Hopefully, however, it’ll still be full of flavor, as ours was – and it’ll work well in those recipes for leftovers!

On the other hand, there are so many considerations about that bird and the stuffing to go with it, before we even get to the roasting/eating part:

Those are my Basics About the Bird. Not a recipe, just a guideline. Because this post is really about the stuffing. No, it’s about the prelude to the stuffing: the croutons that make up its bulk.

Prep for the stuffing began the day before Thanksgiving, with concocting homemade croutons (not all of these would go into the stuffing either—some were ground into bread crumbs for sprinkling atop potato casserole). I was determined that, this year, I would not buy a single bag of those pre-made croutons found in the supermarket. Their listing of ingredients includes whatever additives the manufacturer deems necessary to make sure the little dried-out bread bits stay dry, don’t mold, manage to last from factory to store to your house – which probably means that, even if not

deemed toxic by the government, there are still ingredients in that bag that your (or my) grandmother would not recognize as food. (Rule #2 in Michael Pollen’s Food Rules: An Eater’s Manual [Penguin Press, 2009, 2011]: “Don’t Eat Anything Your Great Grandmother Wouldn’t Recognize as Food.” I happen to be old enough that I can eliminate the “Great” since my Grandmothers were born in the late 1800s! Also note that Pollen’s Rule #3 is, “Avoid Food Products That No Ordinary Human Would Keep in the Pantry,” which means all of those ingredients on labels that I can’t pronounce, let alone remember…).

I started with a good loaf of Italian bread from Bella Napoli Bakery and I used excellent dried spices, many of which I purchase at the Schenectady Green Market. There’s a great vendor there, March through mid-December (they head south for the winter) called Wellington’s Herbs & Spices, out of Schoharie County. In fact, I’m super-glad I made it to the Green Market today – needed more dried parsley (I use a ton of it) – because I learned that next week is their last SGM Sunday until March. This means I will do my best to get back there next weekend, after assessing my stock of dried herbs, to be sure I have an adequate supply for several months!

But I digress… back to the croutons. And a little kitchen magic.

If you’ve been checking out KitchenCauldron for a while, you know I sometimes like to throw in a bit about the “magical associations” of food, which often can be connected to what science has discovered about the healing (and sometimes detrimental) properties of food. I like that one of the tenets of Patricia Telesco’s “Kitchen Witch’s Credo,” as set forth in her book The Kitchen Witch Companion: Simple and Sublime Culinary Magic (Citadel Press, Kensington Publishing Corp., 2005) reads, “There is nothing on this earth that cannot be used for magic.” She also states, “Life is a ritual and act of worship,” and “Kitchen witchery always reflects your own principles.” I believe our “principles” are developing and re-developing over our entire lifetime. A couple of decades ago I might have thought creating croutons in my own kitchen was cool but Pollen’s Rules #2 or #3 wouldn’t have come into the picture. I am older, somewhat wiser and much more worried about the fate of this planet and its inhabitants than decades ago.

As one of those earth-bound occupants, I find it soothing to know that bread is associated with kinship and sustenance (think “communion”); that parsley and garlic are endowed with protective energies (and parsley might also enhance one’s luck); that coriander denotes love, well-being and intelligence; that marjoram’s magical properties are said to include peace and love. It’s interesting to me that the sage sprinkled over my croutons speaks of wisdom and

redemption, and that its thyme could aid in banishing nightmares. Cait Johnson, in Witch in the Kitchen: Magical Cooking for All Seasons (Destiny Books, 2001), writes, “Our culture considers cooking a chore; we are encouraged to get it over with as quickly as possible. But it may help us to remember that cooking was once a magical act. Cooks were priestesses who wielded the power of fire, transforming raw ingredients into nourishment for themselves and their families. The act of cooking linked women with the Goddess, the Great Nurturer.” In a fundamental way, women (and men too) are empowered through their ability to cook/bake. This is true alchemy.

So think of this as a simple bit of alchemy, transforming bread into gourmet-like croutons – which can make stuffing scrumptious, enhance favorite soups and be further transmuted into tasty bread crumbs to top all sorts of dishes. 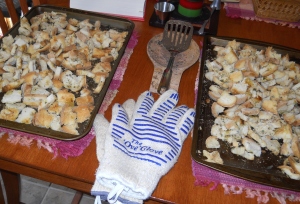 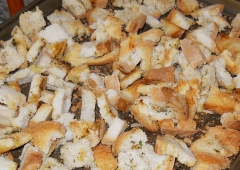 Next blog entry: the stuffing!