That would be me—the lady who says that chocolate has no business floating around in muffins (which I have mostly considered to be breakfast or coffee-break/teatime fare). If you’re a Baby Boomer like me, you might recall the old Bill Cosby routine wherein Cosby is making breakfast for his kids and they want chocolate cake, so that’s what he’s gonna give ’em! Our son Adrian loved that skit (might even have heard it live at the Proctor’s when we took him to see the comedian perform – can’t recall which routines included in the act!), What made it funny was the fact that, two or three decades ago, no one considered chocolate as appropriate on any kind of early morning menu. Who but a father who was not used to pulling together a real meal would even consider dishing it out to his kids? I tend to think chocolate started to sneak into the rise ‘n’ shine food group with the intro by Dunkin’ Donuts’ of their Boston Cream filled donuts. Even I wasn’t immune to those…

But getting back to my kitchen, where three bananas dangled from the “banana hook” on my kitchen counter, already more ripe than I prefer unless mixed into something bake-worthy. And I wanted to make just one more thing to bring to

that chili/bake sale at Kristen’s workplace. So I scanned the dessert/baking cookbook shelves and wound up pulling down the Moosewood Restaurant Book of Desserts by the Moosewood Collective (Clarkson Potter Publishers/Random House, 1997), probably because I have a special love for Moosewood, which I’ve written about on this blog. (I’m not the only Moosewood lover either. Check out a seven-page article, “40 Years of Moosewood!” by Jamie Stringfellow in the November/December 2012 issue of Spirituality & Health magazine, in which it is noted that Bon Appétit named the restaurant as “one of the 13 most influential restaurants of the 20th century.”)

In the long run, the muffins I created changed out or added something like six or seven new or slightly revised ingredients, so it’s not their recipe at all. It was the inspiration that I needed, however, and it worked. If you need a run-through of differences: butter instead of oil; added yogurt; split brown sugar between light and dark; reduced flour amount and added almond meal; added cinnamon; cut vanilla extract in half to add in almond extract; added mini-chocolate chips.

These were heavenly. Bill and I split one. One was packed into the thermal bag with Kristen’s chili & cornbread lunch & cookies (necessary because, otherwise, she is so busy with aspects of the sale/raffle, sometimes all the food is sold before she gets any lunch!). That left eight for the sale. Don’t know who bought them, but I’d be willing to bet they didn’t last long! 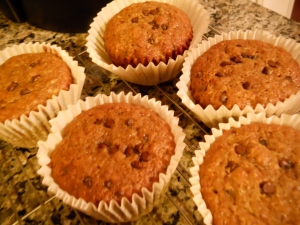